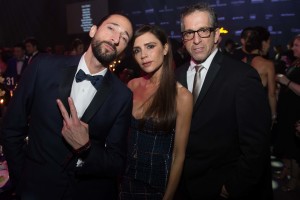 Leave it to Victoria Beckham to draw out a glamorous crowd. Last night in Hong Kong, amfAR, with Calvin Klein Collection and Harry Winston, cohosted this year’s lavish gala to raise awareness of the HIV/AIDS epidemic. Beckham, a UNAIDS international goodwill ambassador, is no stranger to the cause, and her efforts were being celebrated by the likes of Adrien Brody, Liu Wen, and Uma Thurman. Joining them at Shaw Studios were amfAR chairman of the board Kenneth Cole, amfAR CEO Kevin Robert Frost, and Calvin Klein’s Francisco Costa and Italo Zucchelli, along with actresses Michelle Rodriguez and Michelle Yeoh. As guests enjoyed performances from pianist Lang Lang and Grammy Award nominees Aloe Blacc and Elle King, it was time for the auction, presided over by Simon de Pury. The evening raised more than $4 million, helping the nonprofit with its Countdown to a Cure and TREAT Asia initiatives, proving how powerful the drive is to eradicate the disease.