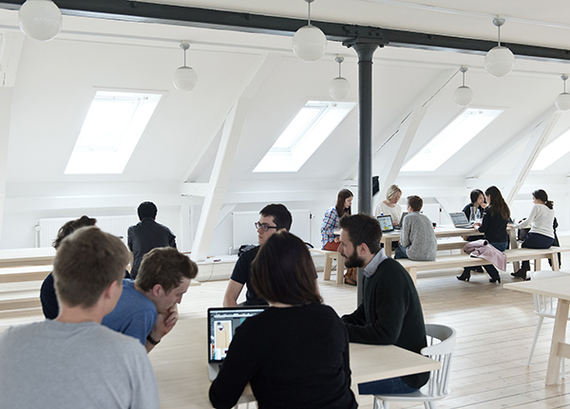 No man is an island and in this age of the open workspace, we humans appear to be very much affected by our surroundings. Professionals sharing an interior landscape, show a consistent level of innovativeness and performance.

Recent studies at Yonsei Business School in Seoul, Korea and at Stanford University, point to this being a consequence of a collaborative environment. It is also supported by new data that was collected by ingomar & ingomar – consulting and Applied Design Science during a design-a-thon for early-stage entrepreneurs held in Pasadena, California and in Copenhagen, Denmark through a research partnership with Rainmaking Loft.

In the “Open office space – Closed offices” study at Rainmaking Loft, we found that startups working in shared spaces have a similar Design Quality and take on comparable risk. This suggests that startups that rub shoulders, agree on where to set the bar for performance. On the other hand, startups, where the team worked together in silos or, closed offices, displayed more than twice the variation in Design Quality and risk-attitude. 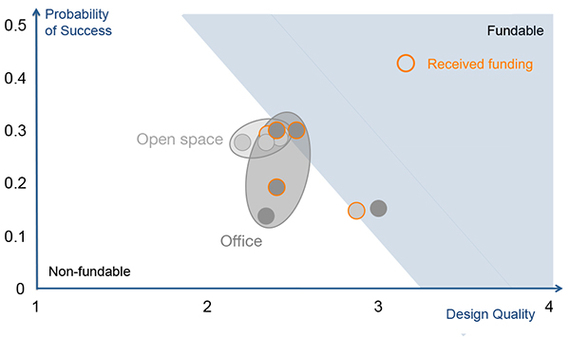 Here, “Show me your friends, and I will tell you who you are”, can be adjusted to: “Show me the startups in your open workspace, and I can predict your chances of succeeding as an entrepreneur.”

What happens is that those startups then become each other’s most accessible ‘best practice cases’. One startup’s boost of international customers, well managed funding round, or glorious piece of PR, gives everyone a feeling of being headed in the right direction.

Unifying standards are developed for doing things (from how one pitches to investors, to how much responsibility one give to interns), because fixed standards are not yet in place within the nascent company.

These standards then influence one’s probability of success and Design Quality since they are constantly being developed and are in flux, given the number and characteristics of entrepreneurs shaping them.

Two co-founders moving in together can change a lot, especially if they have a high degree of visibility, are outgoing and are active on internal social platforms.

One of the first things a new resident can shape is the general ambitiousness – or more precisely, how the entrepreneurs in the shared space talk about their ambitions.

Are one’s small victories and struggles highlighted along the way or does one just silently grind along on a daily basis? A few, charismatic people can change this climate.

Later, when residents know each other better, they will be more inclined to give each other feedback on growth plans and overall concepts. It’s about building trust, although some entrepreneurs have been known to seek a fellow startup’s feedback on their designs within mere weeks of moving into the shared space.

A standard for design quality will not be shaped equally by every entrepreneur in an open-space environment since there will always be a handful of thought leaders controlling the approach more than others and they are influenced by the feedback from the majority.

So how does one make space for the originality of each startup in a collective culture?

Potential strategies for ensuring diversity are numerous and include giving access to private refuges across the space, where a co-founder’s thoughts are not drowned out by the shared conversation. Work-at-home-days can be encouraged and incoming entrepreneurs reassured that there are a thousand right ways to build a business. As new connections are formed within the shared space, the synergy then continues to grow and a sense of group support is perceived.