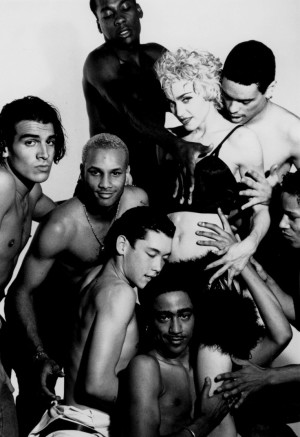 For the cinephile navigating the dizzying lineup at the annual Tribeca Film Festival, it helps to narrow the scope—say, road movies (Detour and Folk Hero & Funny Guy); female directors (Mother and AWOL); or, in this case, thoughtful documentaries that touch on matters of health. The six standout picks below include a portrait of the magnetic backup dancers on Madonna’s Blond Ambition tour (which invariably was touched by the AIDS crisis), an emotionally charged investigation into the struggles surrounding in vitro fertility treatments, one man’s question for happiness, and more.

Strike a Pose
The seven male dancers on Madonna’s 1990 Blond Ambition tour shaped a generation with their onstage bravura and on-camera candor in Truth or Dare, the behind-the-scenes concert doc that brought a then-rare glimpse of gay life (and one very steamy kiss) to the big screen. But as this new documentary reveals, the music’s “Express Yourself” message wasn’t so simple in that turbulent era. Salim Gauwloos, diagnosed with HIV in 1987, reveals his long-kept secret to his tour mates during an emotional reunion dinner captured in Strike a Pose; Gabriel Trupin (who died from complications of AIDS in 1995), struggled with being “outed” in the Madonna doc. If the film is a reminder of the ongoing fight for acceptance (one thinks of the controversial laws governing transgender behavior), it’s also a pure celebration of dance, with iconic vogueing interwoven with recent solos and classroom shots (you’ll find Gauwloos, who goes by the name Slam, in the studios at Broadway Dance Center and Alvin Ailey).

Life, Animated
The must-see autism documentary playing at Tribeca (no, not the controversial one ultimately pulled from the festival) is Life, Animated, based on the journalist Ron Suskind’s book about his son’s relationship with the Disney canon. Through poignant interviews and home movies, the film shows how the Suskinds’ younger boy, Owen, withdraws entirely as a toddler, leaving his family searching for a way in—and they find it. “He’s using these movies to make sense of the world he’s living in,” Suskind says, recalling his son’s deep engagement with The Little Mermaid, Peter Pan, and the rest. “We began to speak to him in Disney dialogue, the whole family.” In the years to follow, Owen, bullied at school, fills notebooks with drawings of Iago, Rafiki, and Sebastian, calling himself “The Protector of Sidekicks.” He leads post-screening discussions at the Disney Club he founded (“so I can be more popular—it worked!”) and moves into his first apartment, watching Bambi’s fateful hunting scene after his parents leave. Featuring classic Disney scenes and a newly created animation, it’s a richly told story that’s both a testament to tuned-in parenting and to the power of film.

Abortion: Stories Women Tell
It’s easy to speak in metaphors and legalese when discussing something as charged as abortion, but there has been a growing movement in recent years to bring to light what is a quiet reality for so many. To that end, this documentary spotlights a cross-section of women in Missouri, a state with stringent regulations (including a 72-hour waiting period), and Illinois, where an abortion clinic takes in patients from across the border. The film’s politics are plain, but the scope of stories is far-reaching: There’s a pregnant doctor who firmly stands behind her work, silver-haired volunteers who escort patients into the clinic, a fiery protester who prays for the practice’s end, and dozens of women—teens, single mothers, victims of abuse—who discuss their personal circumstances. As someone who terminated an unviable pregnancy explains of her motivation to take her story public, “Knowing that you’re not alone is, I think, probably the most important [. . .] reason why we choose to share what happened.” With the Supreme Court now reviewing the restrictive laws in Texas and the fate of clinics there and elsewhere hanging in the balance, watching the Illinois clinic shut off its lights at the end of a long day has extra resonance.

The Happy Film
At the start of this documentary, the Austrian graphic designer Stefan Sagmeister—whose celebrated work includes album covers for Lou Reed and Talking Heads—lays out a straightforward disclaimer: “This film will not make you happy.” And indeed, despite Sagmeister’s aim to treat the pursuit of happiness as a typical design problem, the film doesn’t seem to make him happy, either. There’s a long stay at a Balinese meditation retreat, where serene images are juxtaposed with voice-overs about boredom, back pain, and cliché attendees (onscreen handwriting points out which shoes belong to the “fancy hippie”). He then tests out cognitive therapy, followed by a stretch on antianxiety meds, chronicling the ups and downs (and heartbreaks) that ensue. If the project—loosely inspired by Jonathan Haidt’s book The Happiness Hypothesis—ultimately fails to provide a concrete solution, it hints at the rewards to be found in the process of exploration, through the relationships that result and the new creative projects that come into play.

Haveababy
Each year, the pioneering fertility doctor Geoffrey Sher, M.D., offers up an unusual prize at his Las Vegas clinic: one free round of in vitro fertilization, or IVF. Often a treatment of last resort for those otherwise failing to conceive, the procedure typically has a $20,000 price tag—and, as one interviewee in the film points out, about a 30 percent success rate. For the patients entering Sher’s annual contest (which, he admits, has both altruistic roots and marketing value), it’s like hoping to win the lottery, if the prize is itself another lottery ticket. The documentary, named after Sher’s website, follows three hopeful parents: the contest victors (whose chart is marked “winner”), a Catholic husband and wife, and a single lesbian supported by her mother. “IVF is a numbers game,” Sher explains in the film, referring to the hormone injections used to boost the amount of eggs you can harvest at one time. But there’s more to that numbers game, from hard-earned dollars to the ticking biological clock. Haveababy offers a look inside an otherwise intensely private sphere, marked by economic difficulties, raw emotions, and—with luck—confetti-strewn celebrations.

Bugs
“We have to warn everyone before they eat this that it’s actually not legally recognized as food,” the chef Ben Reade gamely remarks as he’s readying a meal in which the star ingredients are, as the title of the documentary suggests, bugs. He and the researcher Josh Evans—both enthusiastic (then) members of the Nordic Food Lab, cofounded by Noma’s René Redzepi; chef Roberto Flore later joins the project—embark on far-flung missions to discover how the insect world fits into local diets. In large part, it’s a mission to broaden food diversity and find unconventional flavors (“a bit reminiscent of avocado, actually,” says Reade of the Mexican delicacy, escamoles, or ant larvae). There’s also the looming notion, as suggested by the United Nations, that bugs might well be a valuable source of protein in the future as the global population swells. While the film doesn’t exactly point the way forward—it suggests that the picture isn’t as rosy as government agencies and entrepreneurs might make it seem, with oftentimes tough working conditions and issues of sustainability—those with strong stomachs will get a glimpse of the sorts of critters that might someday stand in for movie-theater popcorn.

The post 6 Tribeca Film Festival Picks That Will Change the Way You Think About Food, Health, and Happiness appeared first on Vogue.